Earthquakes to Play Real Sociedad at Avaya Stadium on May 18 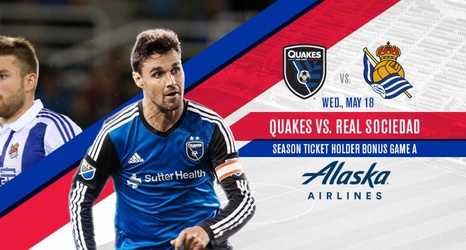 SAN JOSE, Calif. – The San Jose Earthquakes announced today that the club will take on Real Sociedad of La Liga, the top professional league in Spain, at Avaya Stadium on Wednesday, May 18, presented by Alaska Airlines. Kickoff is scheduled for 7:30 p.m. PT. The first 9,000 fans in attendance will receive a voucher to take 50% off flights for up to two people from the Bay Area, including new flights from San Jose to Orange County and San Diego.* More details about the promotion will be announced later.

“We are excited to welcome Real Sociedad, a storied club with a rich history, to Avaya Stadium,” said Earthquakes president Dave Kaval.