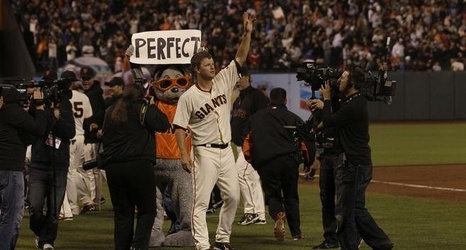 I should have known better.

Matt Cain, five days removed from a perfect game, had just been presented a samurai sword from a Mizuno representative, and he agreed to take some questions from a crowd of reporters despite the fact he was starting that night. There are broadcasters who go out of their way to avoid talking about a no-hitter, and even a simple tweet pointing out that a pitcher is perfect through three innings will draw the ire of a large chunk of the fan base. There isn't a sport that takes jinxes more seriously than baseball, and yet there I was, a few hours before Cain's first start after perfection, foolishly asking him if he had thought about how long it had been since he had allowed a baserunner.