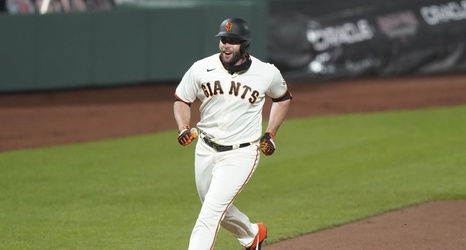 ARLINGTON, TEXAS - OCTOBER 12: Adam Duvall #23 of the Atlanta Braves injures himself while hitting a foul ball against the Los Angeles Dodgers during the second inning in Game One of the National League Championship Series at Globe Life Field on October 12, 2020 in Arlington, Texas. (Photo by Tom Pennington/Getty Images)

The SF Giants have had great success finding right-handed hitters on small free-agent deals. Could they duplicate their success this offseason?

The SF Giants have struck gold in recent years with their signings of players like Wilmer Flores and Darin Ruf.