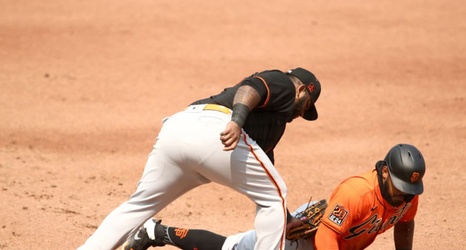 SAN FRANCISCO, CALIFORNIA - JULY 15: Heliot Ramos of the San Francisco Giants slides safely back in to first base that is covered by Pablo Sandoval #48 during an intrasquad game at Oracle Park on July 15, 2020 in San Francisco, California. (Photo by Ezra Shaw/Getty Images)

The SF Giants have already handed out a bevy of Spring Training invites, but they finalized that list on Friday.

In preparation for the Cactus League, the SF Giants have handed out additional invites to a number of key prospects: