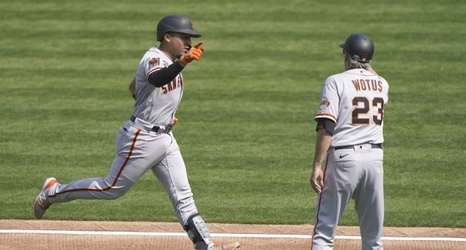 OAKLAND, CALIFORNIA - SEPTEMBER 20: Chadwick Tromp #14 of the San Francisco Giants is congratulated by third base coach Ron Wotus #23 after Tromp hits a two-run home run against the Oakland Athletics in the top of the third inning at RingCentral Coliseum on September 20, 2020 in Oakland, California. (Photo by Thearon W. Henderson/Getty Images)

While coaching staff contract details are rarely made public, the SF Giants confirmed that third-base coach Ron Wotus would be returning in 2021.

The long-time SF Giants coach has been with the organization for over 30 years, including the last 22 seasons on the major league staff.