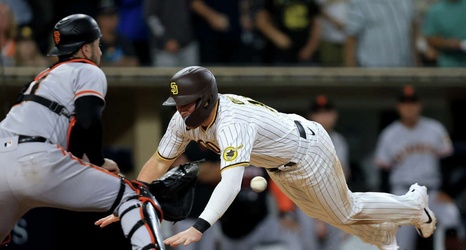 There hasn’t been a whole lot to get excited about with the San Francisco Giants this season, especially on the defensive side of things, but an impeccable play from Brandon Crawford and Joey Bart against the San Diego Padres on Monday briefly bucked that trend.

In the bottom of the seventh, with a man on first and second, Padres infielder Ha-Seong Kim hit one past J.D. Davis that raced into the outfield. San Diego’s third base coach sent Brandon Drury home in an attempt to tie the game at one run a piece. However, Luis Gonzalez was able to collect the ball, and get it to Crawford, who then delivered a well-placed throw to Bart, allowing the catcher to make a deft tag.