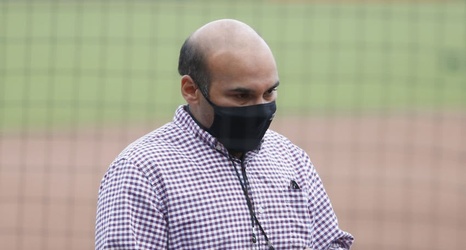 SAN FRANCISCO, CALIFORNIA - AUGUST 26: San Francisco Giants President of Baseball Operations, Farhan Zaidi, talks on the phone before the postponement of the game against the Los Angeles Dodgers at Oracle Park on August 26, 2020 in San Francisco, California. Several sporting leagues across the nation today are postponing their schedules as players protest the shooting of Jacob Blake by Kenosha, Wisconsin police. (Photo by Lachlan Cunningham/Getty Images)

In his third year as SF Giants president of baseball operations, Farhan Zaidi’s tenure is beginning to transition into a new phase.

The honeymoon phase is over.