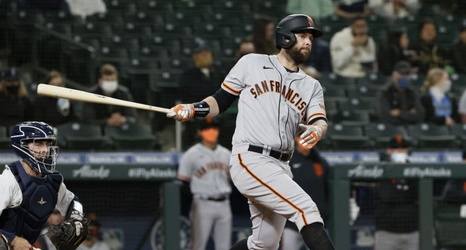 SEATTLE, WASHINGTON - APRIL 01: Brandon Belt #9 of the San Francisco Giants at bat against the Seattle Mariners in the fourth inning on Opening Day at T-Mobile Park on April 01, 2021 in Seattle, Washington. (Photo by Steph Chambers/Getty Images)

The SF Giants have hit plenty of home runs but it has struggled to get going, especially against right-handed pitching. The season is young, so some of this might be written off within a couple of weeks, but it is difficult to overlook the early-season struggles from the key left-handed bats.

In 2020, San Francisco fared much better against left-handed pitched (.