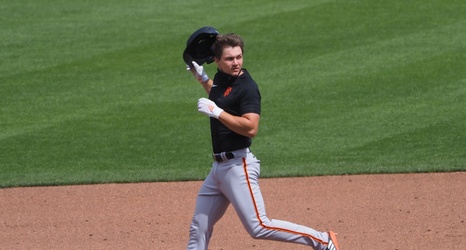 SAN FRANCISCO, CALIFORNIA - SEPTEMBER 23: Joey Bart #21 of the SF Giants hits a triple in the bottom of the eighth inning against the Colorado Rockies at Oracle Park on September 23, 2020 in San Francisco, California. (Photo by Lachlan Cunningham/Getty Images)

Jim Callis of MLB.com released a piece on the state of the SF Giants farm system on Thursday. He had some strong praise for Joey Bart and Patrick Bailey.

The SF Giants farm system is the deepest it’s been in years. Since Farhan Zaidi became the team’s president of baseball operations, many prospects already in the system had breakout 2019 campaigns.