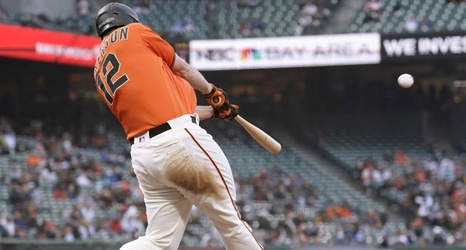 SAN FRANCISCO, CALIFORNIA - JUNE 04: Alex Dickerson #12 of the San Francisco Giants hits a three-run home run against the Chicago Cubs in the bottom of the second inning at Oracle Park on June 04, 2021 in San Francisco, California. (Photo by Thearon W. Henderson/Getty Images)

At the very least, the SF Giants will split the series against the Chicago Cubs after securing an 8-5 victory on Friday night. Of course, there are two games remaining in the series, so they can get greedy as well.