On this date, 2005: Giants get a kick out of Juan Marichal statue 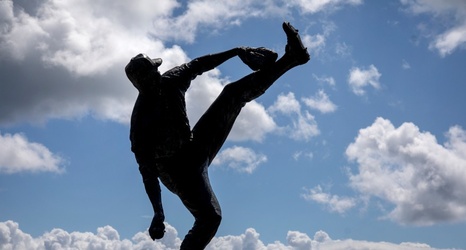 The celebration of Juan Marichal on Saturday extended far beyond the dedication of the bronze statue outside SBC Park which freezes his unforgettable pitching motion for all time.

The Giants wore jerseys emblazoned “Gigantes” to honor Marichal, a native of the Dominican Republic, and the team’s Hispanic heritage. These jerseys were to be autographed by the players for an online auction on the team’s Web site beginning Monday.

The Dominican flag flew alongside its American counterpart. “The Star-Spangled Banner” was preceded by the Dominican national anthem. Fans received not only commemorative pictures of Marichal but also signs that read “Vamos Gigantes” (Spanish for “Go Giants”).