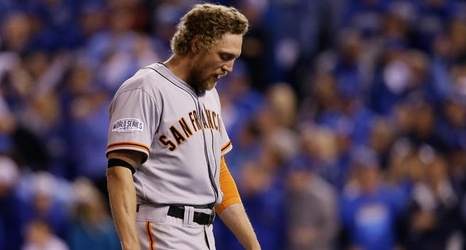 The Giants relied on Hunter Pence's leadership during his first stint with the team. He didn't pick up "The Reverend" moniker for nothing.

Pence earned the nickname after the 2012 NLDS, giving his teammates a fiery, inspirational sermon as San Francisco trailed two-games-to-none in the best-of-five series with the Cinncinati Reds. The Giants overcame that deficit, and a three-games-to-one hole against the St. Louis Cardinals in the NLCS, to win their second World Series of the decade following Pence's speech. Though he slashed just .210/.230/.290 in his first postseason in orange and black, the speech cemented Pence's place in Giants lore.