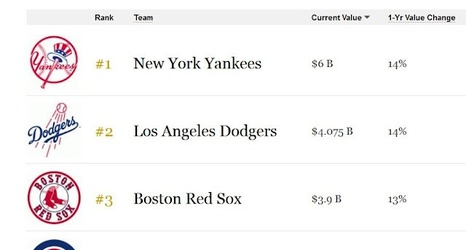 Forbes came out with their annual rankings of MLB clubs. The Yankees are #1 with an estimated value of $6B. The Dodgers are #2 at just over $4B with the Red Sox and Cubs third and fourth at just under $4B. The San Francisco Giants come in at #5 with a valuation of $3.5B. That's three-and-a-half BILLION dollars!

Did you ever think the Giants would be one of the elite, big-name franchises? When you were shivering in Candlestick watching another hapless squad with a few thousand other lunatics, did you imagine this day would come?