Why the San Francisco Giants didn't make a deadline deal 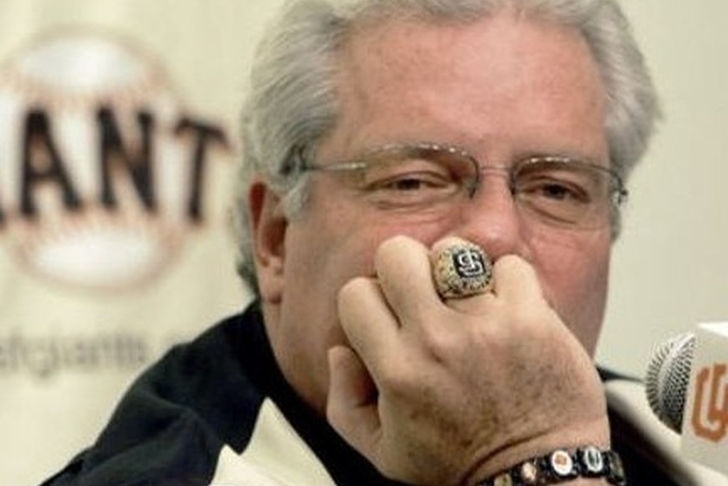 The San Francisco Giants are the defending World Series Champions. They have won the title in two of the last three years, due in no small part to various deadline deals and waiver wire pickups by general manger Brian Sabean and his staff. They are also 46-59 this year, last place in the Nation League West.

This is a very different scenario for San Francisco. On deadline day in each of the last four seasons, the Giants found themselves in the thick of a postseason race. And each year, they made a fairly significant trade. In 2009 it was second baseman Freddy Sanchez, who would become an integral part of the 2010 Championship team. In 2010 they snagged relievers Javier Lopez and Ramon Ramirez, who became - apart from closer Brian Wilson - the centerpieces of the Giants bullpen down the stretch.

Despite the devastating injury to Buster Posey in 2011, the Giants were still in the division lead on July 31. They dealt for All-Star outfielder Carlos Beltran and second baseman Orlando Cabrera, needing a replacement for the injured Sanchez.  Last year they nabbed another All-Star in outfielder Hunter Pence and second baseman Marco Scutaro, who was dubbed "blockbuster" by his teammates and, like another seemingly-minor late-season acquisition (Ross), won the NLCS MVP.

But this year: 13 games under .500, last place in the division and seemingly finding new ways to lose every day. There is not just one or two critical pieces to add, as their has been in recent past - relief help in 2010, a second baseman in 2011, an outfield bat in 2012. The way this team has played, the Giants could use another starting pitcher, a few more relievers, and a bat or three in the outfield and at first base. But that would only make sense if they were in contention, which they most certainly aren't.

In one of the worst trade markets most people can remember for a good long while (Bud Norris the highlight of deadline day? Come on), the Giants had a few chips to dangle. Pence was probably one of the five best bats out there (which is more of a statement on the trade market than anything else). Lopez is as dominant a left-handed pitcher as they come. But the Giants were in no rush to trade these guys; certainly not for a decent prospect or two.

"We set a high bar and people missed the mark," said Sabean. "They didn’t even approach the mark. That was a little frustrating, if not embarrassing."

Nothing good comes out of making a deal for no reason other than for the sake of making a deal. The Giants don't need salary help, so they weren't eager to unload. This year is pretty much a lost cause, so they weren't going to pull the trigger on a trade that might help in the short-term but hurt long term (like Carlos Beltran for Zach Wheeler in 2011).

Yet there is virtually no difference - at least personnel - between the 2013 team and the 2012 team that won it all, save for a pair of critical injuries to starting pitcher Ryan Vogelsong and outfielder Angel Pagan. The difference is that pretty much everyone on the team - especially the pitchers - isn't playing anywhere close to the level they did in years past. It's as if the baseball Gods are cashing in on all the good karma they gave San Francisco in 2010 and 2012 in one crazy, God-awful season.

There is no better example of this than Matt Cain. Matt Cain is a damn good pitcher. Before this year, he had a career ERA of 3.27, hitting marks like 2.79, 2.88, 3.14 and 2.89 in the last four years. This year, he’s on track to have to worst ERA of his career: 4.79, a full two points higher than a year ago. He has already given up almost as many earned runs as he did all of last season. Hell, he has a negative WAR.

There’s not a single person in baseball that won’t tell you Matt Cain having a negative WAR is an aberration. In fact, the Giants believe that this entire season is an aberration. Take a look at their 4.14 team ERA. That is so far worse than any of their marks in the last four years (3.55, 3.36, 3.20 and 3.68 from 2009-2012, respectively), there is no way not to say that a very large portion of that is an aberration.

The Giants may not be a great team. But they are also not a .438 team, their winning percentage this year. They are certainly not a .343 team, their winning percentage over the last 2.5 months. They are a team that, as they proved in 2010 and 2012 and even 2011 to an extent, can compete with anyone and find a way to squeeze into the post season, which is all that really matters (see the 2011 World Series Champion St. Louis Cardinals for proof of that).

Sabean and company intend to resign Pence and Lopez, two All-Star caliber players (even if Lopez never has a chance at that). No one expects Matt Cain to go the way of Tim Lincecum, and don’t say “no one expected Tim Lincecum to go that way either” because you would be very wrong.

This team is better than the way they are playing, simple as that. And they will be better next year. They will not be the best team in baseball, nor have they ever been. But they are not a bad team, and that has been proven. Next year will be very different.