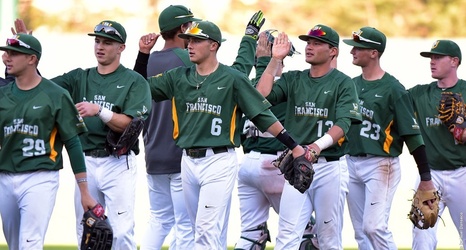 MORAGA, Calif. – Scoring early can sometimes be both a blessing and a curse as the Dons realized on Saturday afternoon when USF took a 6-0 lead after the second inning and had to fend off a five-run eighth inning surge by Saint Mary's to earn a 6-5 win over the Gaels at Louis Guisto Field.

Nico Giarratano clubbed a pair of doubles, drove in a run and scored twice to lead the Dons offensively. Allen Smoot picked up two RBI of his own and scored a run.

Freshman right-hander Thomas Ponticelli carried a no-hitter through the first five frames and improved to 3-4 with the victory, but ran into trouble by surrendering four runs in the eighth.