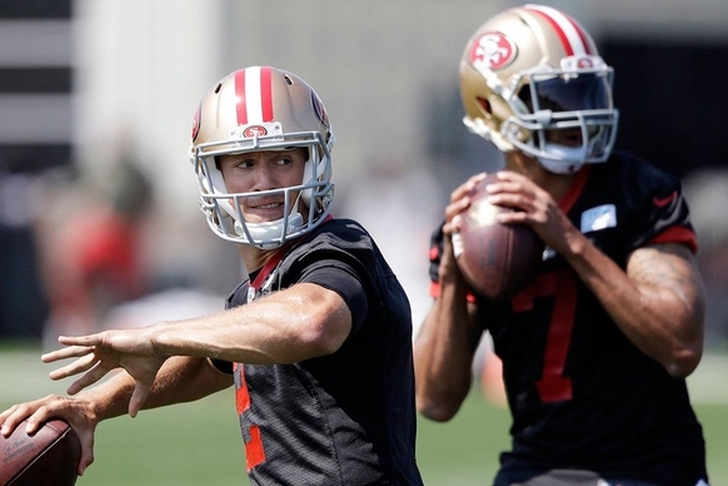 The Injuries
Injuries are an unfortunate reality of the NFL and the 49ers haven't been immune to them. The minor injuries to Arik Armstead and DeForest Buckner appear to be healed, which is a good sign considering the praise Armstead has been getting. Unfortunately, WR Eric Rogers won't be playing any time soon. He has a torn ACL, ending the former CFL star's chances. The 49ers had high hopes for Rogers. QB Colin Kaepernick missed practice today, with what the team called a planned day off. The 49ers' media isn't so sure, since the "planned" day off hadn't been mentioned before.

Colin Kaepernick not participating in team drills at start of #49ers practice. Training staff worked on right arm/shoulder this week.

It's a worrisome sign for Kaepernick, who is in the midst of a starting position battle.

QB Battle
It's Kaepernick vs. Blaine Gabbert and so far, neither look that good. Chip Kelly has proven himself with QBs in the past, but he has his worked cut out for him. The QB battle will continue for at least the first two preseason games, and Kelly might let the third game determine his starter. If Kaepernick is injured, Gabbert will have the advantage. This is easily the biggest storyline for the 49ers this training camp.

Return Of Anthony Davis
The 49ers' offensive line was bad last year and the hope is that Anthony Davis can start at right tackle. He's still the backup behind 2015 seventh rounder Trent Brown, but Davis is getting praise so far from camp. By all accounts, Davis is more matured and focused. If he can shake off the rust, he might be even better than he was before he took the year off to rest his body and mind. He's still just 26 years old.

Blake Bell Stepping Up At TE
The 49ers might have a new red zone threat in TE Blake Bell. A part-time QB at Oklahoma, it looks like Bell is starting to acclimate to the tight end position full-time. He's one of Gabbert's favorite targets in practice, especially in the red zone. Vance McDonald and Garrett Celek have more experience, while Bruce Miller is making the move from fullback as well. The 49ers have options, but keep an eye on Bell.