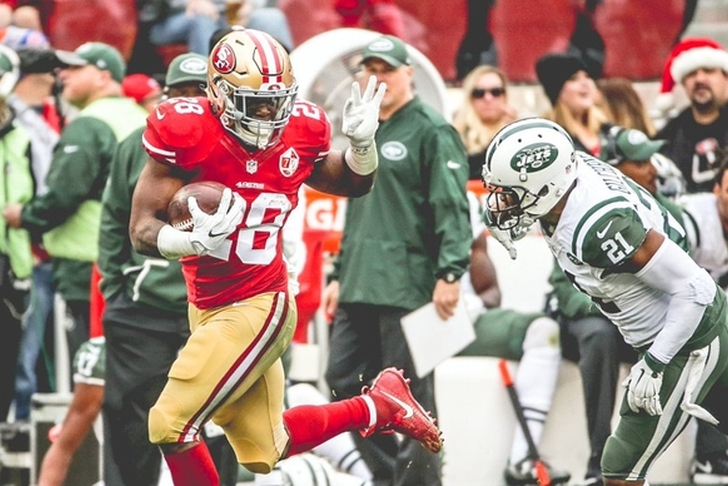 The San Francisco 49ers were up 14-0 early in the first quarter, but that's where the positives start to run out. The 49ers blew a 17-3 halftime lead, letting the New York Jets come back and win 23-17 in OT. It's the 12th straight loss for the 49ers, who are now 1-12 this year. Both teams are already eliminated from the playoff race, but there are some takeaways.

3. 49ers' Run D Is Terrible
Look, we already knew this. The 49ers' run defense hasn't really stopped anyone this year and that was the case this week. Matt Forte left with an injury and Bilal Powell came on to rack up 145 yards on 29 carries. The Jets as a team had 188 yards on 40 carries. Despite six sacks of Bryce Petty and one pick, the Jets' offense still found a way to do just enough to win. And the 49ers' terrible run defense is to blame.

2. Carlos Hyde Might Be The Only Offensive Skill Player Worth Keeping
I'm sure more than just Hyde will be back next year, but he might be the only one truly worth keeping. At the very least, he's the only one the 49ers should feel confident in. Vance McDonald and Jeremy Kerley have played big roles, but if the Niners get a cost-effective chance to find an upgrade, they might as well do it. But Hyde's 193 yards on just 17 carries was very impressive, even if he might have been able to carry it more. He's a long-term piece, but the rest of the options at the offensive skill positions? That's unclear.

1. The 49ers Are Just Bad
Like, really bad. They took a 17-3 lead at halftime against a struggling Jets team and still found a way to lose. Chip Kelly's playing with a weak hand, because the 49ers are seriously lacking talent and it shows in the second half. We've seen this story before: the Niners actually play okay in the first half, but the second half comes and San Francisco finds a way to lose. Maybe that's the lack of talent, maybe it's the coaching or maybe it's some kind of combination. But the end result is clear: the 49ers are bad and there is not light at the end of the tunnel.