Why Richard Sherman was unsurprised 49ers didn't draft defensive back 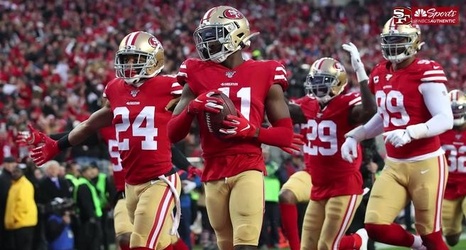 Many people were surprised the 49ers went the entire 2020 NFL Draft without selecting a defensive back, considering none of Richard Sherman, Jaquiski Tartt, Emmanuel Moseley, Ahkello Witherspoon and K'Waun Williams are signed beyond the upcoming season.

Sherman was not one of those people.

"It's almost like we have the No. 1 pass defense in football or something," Sherman said Wednesday morning on KNBR's "Murph and Mac" show. "Maybe it worked out a little bit for us. I could be crazy but that's what it would seem like to me."

It wasn't almost. The 49ers did have the top-ranked pass defense in the NFL last season, limiting opponents to an average of 169.