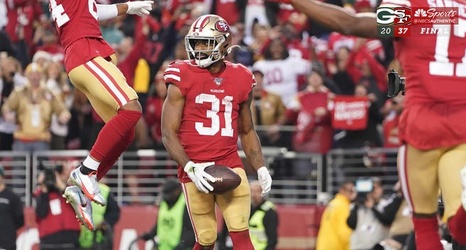 Raheem Mostert stood on the stage Sunday at Levi's Stadium with confetti raining down on him. The 49ers running back held the George Halas Trophy in his right hand and his young son in his left. For a moment, he had to soak in the surreal situation he found himself in.

He locked eyes with his wife and his mother-in-law and admittedly shed a few tears. What really had him lost in it all, though, was his son.

"The biggest moment for me was when I was holding my son up there," Mostert said Tuesday on ESPN Radio's "The Dan Le Batard Show with Stugotz.