When a kid yelled, ‘Give me your shoe,’ Richard Sherman did more than that 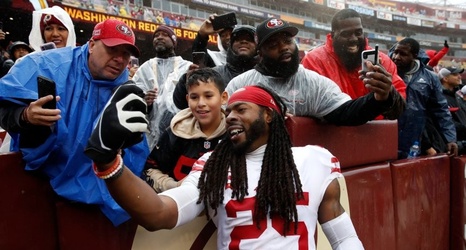 SANTA CLARA — Richard Sherman emerged from the tunnel at Memorial Stadium in 2010 after Stanford scored a stunning 48-14 victory over California in the Big Game.

He had made a big interception at the Stanford 5-yard line that helped propel an Andrew Luck-led onslaught against the school’s biggest rivals.

As Sherman re-entered the stadium on a chilly November day he recalled hearing a voice. A kid was screaming, “Give me your shoe.”

“There goes one shoe,” Adler recalled. “Then the other. Then his gloves one by one.