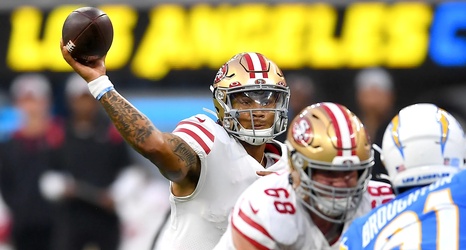 Depending on when you started watching the game, you would’ve either thought that Trey Lance wasn’t deserving of being the No. 3 overall pick in this past NFL Draft or that he should be the starter for the 49ers come Week 1.

Following a Jimmy Garoppolo interception on the opening possession, Trey Lance was inserted into the first-team offense by Kyle Shanahan. Lance hit Deebo Samuel for a first down, but the drive stalled when he couldn’t complete a third-down throw to the same wideout.

It didn’t get any better for the first-round pick, as his next two offensive possessions ended up in an interception and a punt.