Top 5 takeaways from 49ers win vs. Redskins in Week 7 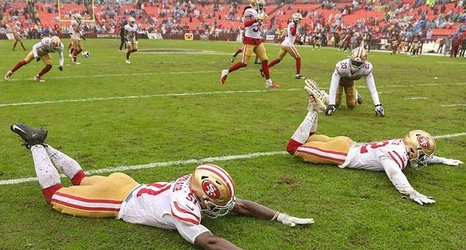 Related Topics: Washington Redskins, San Francisco 49ers, Take Me Out to the Holosuite

If ever a game was a war of attrition, it was this Week 7 victory for the San Francisco 49ers over the Washington Redskins.

It was a game that matched the atrocious weather conditions, the Niners used their spectacular defense to post a road shutout in a 9-0 win that seemed like a throwback to yesteryear when running was the preferred method of offense.

Washington came to play as well. Despite being 1-5, the Redskins were only two games back from the division lead. Their defense came to play, and they were initially very successful running the ball.