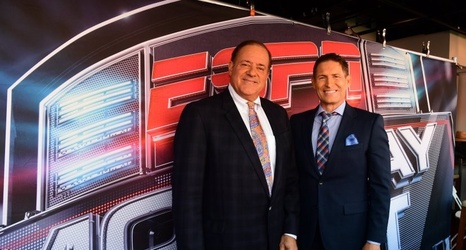 Chris Berman likes the Chiefs in this one (35-32), and that’s saying something because the ESPN giant once had a 49ers Super Bowl ring.

The ring, from Super Bowl XXIII — the Joe-to-John-Taylor Super Bowl, also in Miami — was a gift from then-49ers owner Eddie DeBartolo. Berman ultimately returned it.

”This was a personal gift from Mr. DeBartolo, not the 49ers,” Berman told the Chicago Tribune in 1991. ”Nothing has ever swayed what I see or what I say when I report on the 49ers, the NFL or anything else in the world of sports, for that matter… Anyone who thinks differently doesn`t know me or my work.