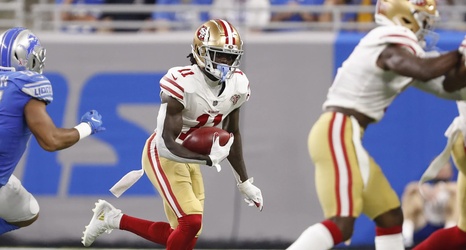 The 49ers surprised many people when they started wide receiver Trent Sherfield, over Brandon Aiyuk in their Week 1 victory over the Detroit Lions. Popular sports radio host Rich Eisen touched on the surprising move on this week’s episode of The Rich Eisen Show.

Aiyuk, of course, was drafted by the 49ers in the first round of the 2020 NFL draft and had an impressive rookie season, hauling in 60 receptions for 748 receiving yards and five touchdowns. On the other hand, Sherfield was signed to a one-year deal worth less than a million dollars this offseason and after primarily contributing on special teams for the first three years of his career with the Arizona Cardinals.