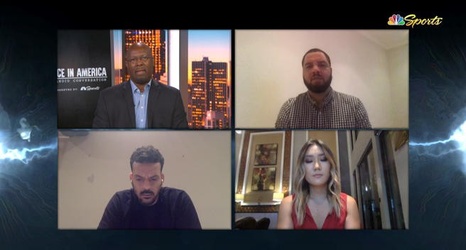 Actor Chadwick Boseman, known for his role as T'Challa in "Black Panther" and his portrayal of Jackie Robinson in "42," died Friday after a four-year battle with colon cancer. He was 43.

Boseman's death came on the day MLB was honoring Robinson. With the 2020 season delayed until July, the April 15 celebration of Robinson breaking baseball's color barrier was pushed back to Aug. 28, the 57th anniversary of the March on Washington and Martin Luther King Jr.'s "I Have A Dream" speech.

In Friday night's episode of "Race in America: A Candid Conversation" on NBC Sports Bay Area, former Warriors and Kings guard Matt Barnes reacted to Boseman's death, as the news broke during the show.