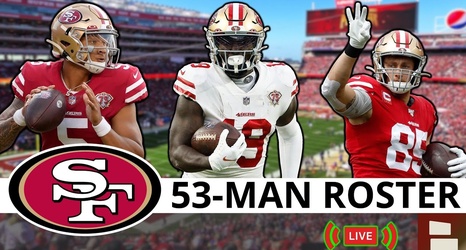 The San Francisco 49ers Report is LIVE breaking down the final 49ers 53-man roster following a slew of 49ers roster cuts. Chase Senior takes you through who made the 49ers roster and who didn’t make the cut. Make sure you join the conversation by getting your questions and super chats in by using the #49ers. The 49ers schedule has them on the road week 1 against the Chicago Bears and although some 49ers roster moves will be made in the leadup to the NFL week 1 schedule, Kyle Shanahan and John Lynch pretty much have their 2022 49ers roster set.