Kendrick Bourne could play significant role for 49ers in 2020 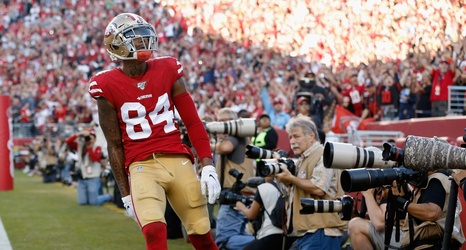 While his role diminished somewhat in 2019, San Francisco 49ers wide receiver Kendrick Bourne still enjoyed a solid year of production for an offense which ended up going all the way to Super Bowl LIV against the Kansas City Chiefs.

Bourne, a 2017 undrafted free agent, has solidified himself in head coach Kyle Shanahan’s offense, particularly within the red zone, where his five receiving touchdowns were tied with tight end George Kittle for the team lead last season.

And while Bourne only netted 358 receiving yards on the year, largely due to the Niners’ midseason acquisition of veteran wide receiver Emmanuel Sanders at the NFL trade deadline, Bourne was still a major factor in key situations.