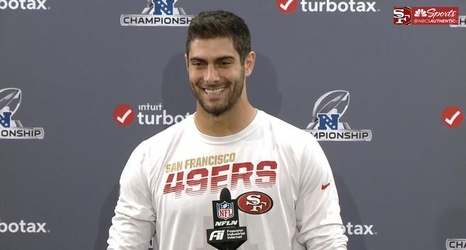 The 49ers have a rich and storied franchise history. Montana led the scarlet and gold to four Super Bowl titles, holding the all-time record for most Super Bowl passes without an interception (122) and passer rating 127.8. Young took over and led the Niners to a win in Super Bowl XXIX.

Now, Garoppolo has his chance to begin his legacy with the storied franchise. In his first fully healthy season, the Eastern Illinois product helped lead the 49ers to a 13-3 record and the No. 1 seed in the NFC. After a division-round win over the Minnesota Vikings, Garoppolo has the 49ers one win away from a berth in Super Bowl LIV and the ability to join Montana, Young and Colin Kaepernick as quarterbacks to lead the Niners to the biggest games.