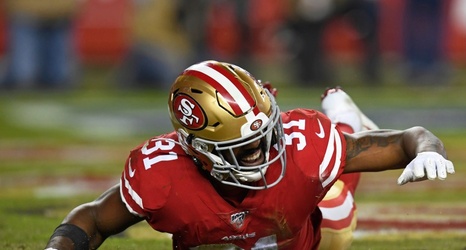 BALTIMORE — Here are the highs and lows midway through the 49ers’ visit to the Ravens, who lead 17-14 at halftime:

Jimmy Garoppolo’s fourth-down touchdown pass to Deebo Samuel gave the 49ers a startling 7-0 lead, the first points scored on an opening drive by a Ravens opponent this season.

The Ravens pulled even at 7 when they eventually converted a Garoppolo fumble (on a third-down sack) into a Lamar Jackson touchdown pass to Mark Andrews. Jackson’s 1-yard touchdown run on the Ravens’ next series put them ahead 14-7.

The 49ers punched back with a 40-yard touchdown run by Raheem Mostert to square things 9:12 before halftime.