George Kittle on his love of blocking, newfound stardom and wrestling 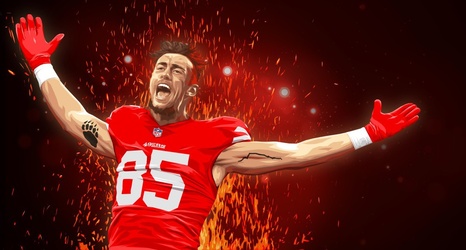 In a season set up by big expectations, but marred by injury, there was at least one bright spot for the 2018 49ers: tight end George Kittle.

The fifth-round draft pick out of Iowa in 2017 broke out in his sophomore year, despite pairing with the Niners’ understudy quarterbacks for 13 games. Kittle’s 1,377 receiving yards set a new NFL record for tight ends, and with Jimmy Garoppolo now back under center, it begs the question: What’s next for the 49ers’ No. 1 target?

And, while we’re at it, how on Earth did we get to the point where a scrawny kid from Iowa is now one of the NFL’s best players and most engaging personalities?