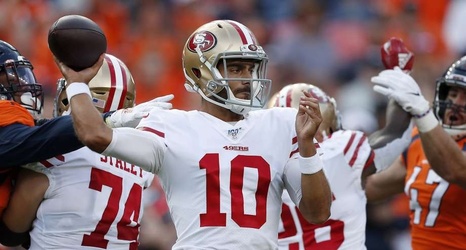 After Garoppolo went 1-for-6 for 0 yards and one interception against the Denver Broncos on Monday, hosts on 98.5 The Sports Hub's "Felger and Mazz" let the 49ers QB have it.

"Look who's making his comeback from a torn ACL because dummy couldn't get out of bounds last year," co-host Jim Murray said. "Jimmy G, the Italian [Brock] Osweiler."

"Oh, this was so good," Murray said of the former Patriot's bad outing.