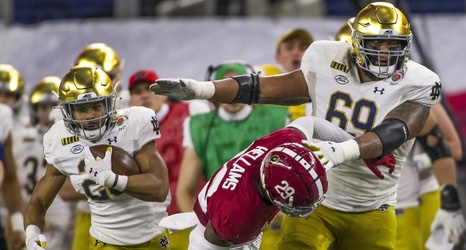 Rookies around the league are beginning to sign their contracts as rookie minicamps are scheduled to get underway this weekend. The 49ers second-round pick out of Notre Dame, Aaron Banks, was the first member from the Niners’ rookie class to sign his contract.

Banks’ deal is worth $7.074 million total. He gets a $2.5 million signing bonus, and his 2021 salary-cap hit is $1.29 million. That’s great value for a starting offensive lineman. Looking at last year's No. 48 overall pick, Seahawks linebacker Darrell Taylor, his cap number doesn’t surpass $2 million until the final season of his four-year contract.