49ers-Packers is a tale of two quarterbacks, and it might not be a pretty one 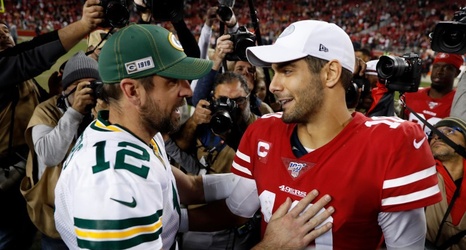 Early this week, Rob Reischel, who contributes to Forbes magazine, checked in with a take that will not play well in the Aaron Rodgers Fan Club.

“Not many people are giving the Green Bay Packers a chance in Sunday’s NFC Championship Game,” Reischel wrote. “The 49ers routed the Packers, 37-8, back in Week 12. San Francisco is an early 7-point favorite. And the 49ers seem to have the edge at several different positional groups.”

To pull off “a shocking upset,” he added, “Rodgers must play at an all-world level. Using history as an indicator, though, the odds of that seem rather remote.