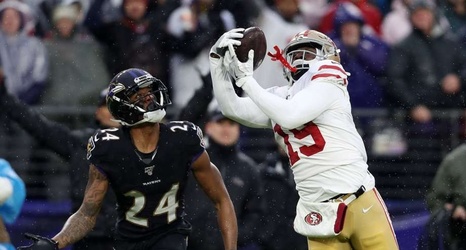 One drive into Sunday’s Ravens-49ers affair, the NFL’s most anticipated Week 13 matchup was already living up to the hype.

On a 4th and 2 from the Ravens' 33-yard-line, the Niners elected to go for it on their opening drive, and go for it they did: 49ers quarterback Jimmy Garoppolo hit wide receiver Deebo Samuel on a 33-yard touchdown pass to put San Francisco up 7-0 in the first quarter.

Samuel, who has been electric the last two weeks with back-to-back 100+ yard receiving efforts, eluded his defender up the right sideline, then threw a perfectly timed elbow into the chin of Baltimore cornerback Marcus Peters to give himself just enough separation to make the catch and score unimpeded.