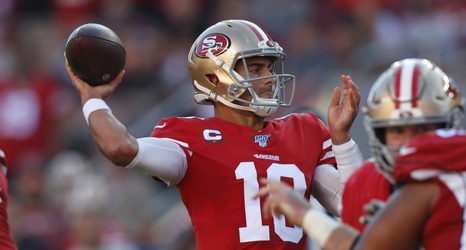 SANTA CLARA — Jimmy Garoppolo shook off a pair of red-zone interceptions and rallied the 49ers to a 36-26 win Sunday over the Arizona Cardinals, hitting Jeff Wilson Jr. on a 25-yard touchdown pass with only 31 seconds to spare.

Solidifying the victory, the 49ers defense recovered a pair of Cardinals fumbles in the final 25 seconds, and D.J. Reed scored on a fumble recovery to end the topsy-turvy affair.

Preceding Garoppolo’s fourth and final (and winning) touchdown pass, the 49ers were awarded a first down via a replay ruling rather than face fourth-and-1 and a potential tying field-goal attempt from Chase McLaughlin.