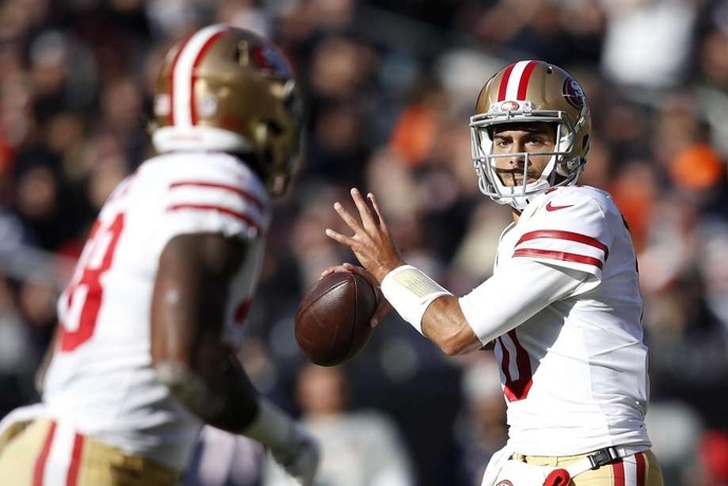 The San Francisco 49ers have now won two of their last three games following a 15-14 win over the Chicago Bears in quarterback Jimmy Garoppolo's first start for the team, so while they still are tied for the worst record in the NFC with the New York Giants, they are certainly trending in the right direction. Can they continue their hot run over the final four games of the season with Garoppolo leading them? Here's how we think they'll do over the last four weeks:

Houston's offense has completely sputtered since Deshaun Watson went down with a torn ACL, posting over 16 points just once in the five games since. This game will probably be another ugly one, but Garoppolo is only going to improve week-to-week as he gets more comfortable with the playbook and his 49ers teammates. This feels like a 16-14 or 20-17 win for the Niners.

This one is pretty simple. Tennessee's offensive is entirely predicated on running the ball and establishing the run, ranking seventh in the league in rushing (122.1 yards per game). On the flip side, San Francisco has the fourth-worst rush defense in the league, indicating the Titans should be able to dictate the tempo of the game and enforce their will.

This is simply not one San Francisco has any chance to winning as long as everyone on Jacksonville stays healthy. They lead the league in sacks and will get plenty of pressure on Garoppolo and, coupled with Leonard Fournette going up San Francisco's bad rush defense, will lead to an easy win for the Jags.

Los Angeles has solidified themselves as a premier team in the NFC with a high-powered offense. San Francisco nearly upset the Rams in their Week 3 matchup thanks to their biggest offensive output of the season, something we don't see the 49ers repeating. LA will probably be playing for playoff seeding, giving them more motivation than a 49ers team that will be headed into the offseason.