Here's What Kyle Shanahan Said About Reuben Foster's Injury, Loss To The Panthers And More At His Press Conference 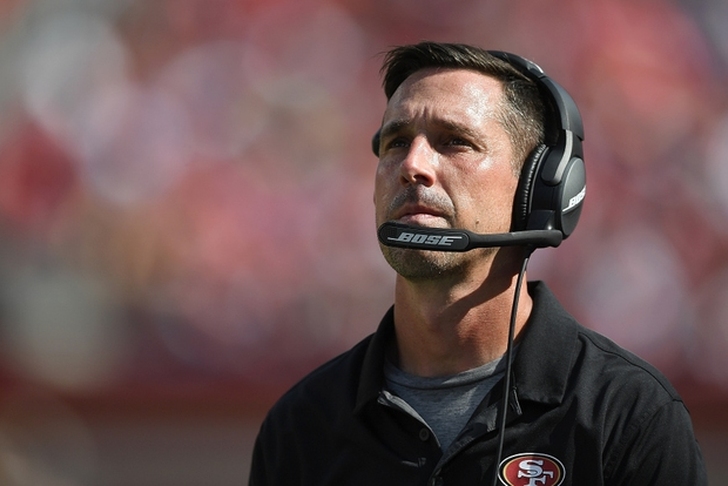 Below is the entire transcript of Shanahan's press conference. The questions from the media are bolded, with Shanahan's answers in quotes below.

On The Health Of LB Reuben Foster:
"It was more optimistic than it looked. Still got to do more tests and stuff. He couldn’t return. Some type of ankle injury. We’re going to have to look more into it. It was definitely better than it seemed out there."

On Foster's X-Ray:
"They thought at first it possibly was a tibia and they came out and told me at half time that was a negative. But, he wasn’t good enough to go back in the game."

On The Offense Issues:
“I think anytime that you have those two turnovers, especially, I thought we had some opportunities early and we didn’t come down with it. We had a couple opportunities. We had that deep ball that we just missed on the third down. I think that was our opening drive. I think the next series, I thought we had a chance to get a huge play to [FB Kyle Juszczyk] Juice, I mean [TE George] Kittle down the sideline. We would have ended up inside the 10 and I think we were just a little short on protection and ended up having a sack fumble on that. That turned it over. Then we lost Reuben on the next play and they went down and scored. I think the opportunities we had we missed and once we got in that second half and started to become a little bit one-dimensional. That’s a team and a defense that you do not want to become one dimensional against, so it just made it tough."

On How The Team Fared After Foster's Injury:
"Reuben is a guy that we definitely want out there. I thought it was a little deflating when you have a big turnover like we did especially a the play that was a chance to have an explosive touchdown. So, that was deflating on offense. Then to turn it over instead of that and then to lose a guy the next play and then I think they went down two plays later and scored. I thought our guys responded, though. I didn’t see a lack of effort or guys stopping in any way. I thought our defense battled all game. They gave up two touchdown drives and both of them were off of turnovers on the short field, so that was a tough position the offense put them in. I’ll see the tape tomorrow, but I thought the effort was there. We just have to make sure we get better."

On Going For It On Fourth Down:
"I can’t remember exactly every single one. I think in the second half it was because we needed to because of the difference in the score. I think we were down one. It was just out of field goal range for us and I liked what we had. I thought we’d have a chance to move the chains and we didn’t get it. Anytime you’re in that type of area, anywhere between the 50 and the 35, it’s always that area where do you want to punt and put them inside the 10 or do you want to go for it and try to get yourself into field goal range, possibly a touchdown."

You were going to go for it on fourth down again but you got delay of game called. It looked like you were signaling a timeout to the officials. Did they not hear you? What happened?

On Not Getting A Timeout Called When Trying Trying To Go For It:
"Yeah, they didn’t hear me. I ended up changing my mind on of that. I was going to call a timeout but they reset the play clock, ended up giving us 25 more seconds. So, I thought we had plenty of time. Then we got up there and we just took too long at the line and so I was yelling to call a timeout and the ref didn’t hear me."

On Clock Management:
"They’re all in our headsets upstairs. No one was worried about it because we were there with plenty of time and then you could tell that [QB] Brian [Hoyer] wasn’t aware of it at the time, so we tried to yell timeout at the last second and the ref didn’t hear me. That’s why we ended up getting that delay of game."

On Hyde-Hoyer Confusion:
"I think he just got confused coming out. I think Brian spun the wrong way and they ended up not making the handoff."

On Putting Hyde In Motion:
"Lots of things - to get leverage in the pass game, to change fronts, whether you’re going to three-technique shade, to give you certain indicators. There’s hundreds of different things and something we do almost week in and week out."

On Getting Reps As A Head Coach
"Not really. The pace is the same way it’s been my whole career. Calling plays and going. I think [defensive coordinator Robert] Saleh and those guys did a good job on defense. The time out issue came when I didn’t think we were going to get a delay of game, so I wasn’t right next to him (the official) for that reason. I wasn’t really worried about it and once I realized that we were, it surprised me. So, I was just yelling to him too far away and that’s why he didn’t have a chance to hear me. The game is like it always is - it’s fast, it’s competitive, and we went against a good team today and I don’t think we were at our best. We just have to go back to work."

On Growing Pains:
"I definitely expect us to be farther along. I think that every week. It’s not something new. It’s something we’ve been doing since the first day we got here. I was disappointed in that. I believe we had five of them. It’s hard enough to win in this league, but you can’t beat yourself. That’s something we’ve got to figure out why it’s happening and we’ve got to clean it up."

On If The 49ers Beat Themselves:
"I don’t think that. That’s a real good team and you’ve got to be at your best to play against them. By no means do I think we beat ourselves. I’ve got to give credit to them. They deserve it. We can make it a lot easier."

On Hindsight With Going For It On 4th Down:
"I won’t decide that now, but I will all day tomorrow. I’ll go back and look at the time and what happened, especially the ones earlier in the game. Those are, to me, the ones you have to look back and definitely decide. The ones later in the game, we didn’t have a choice. We were down three scores. A field goal wasn’t going to do anything for us. We had to do that in the second half, but I’ll definitely go back and look at all of the as always."

On The Defense:
"Yeah, the way the game played out, they gave us a chance. The two touchdowns they gave up were off the turnovers on a very short field. I thought they did a decent job in the run game and the pass game. They got us the ball twice with two turnovers. Unfortunately, we had two of our own. Again, I’ll see the tape, but I’m definitely never satisfied and want us to do better in all facets, but it looked like they competed pretty well."

On Newton's First Touchdown Pass:
"Just watching it live, I think we were in three deep zone and [Carolina Panthers QB] Cam [Newton] held onto it for a little bit and he started to get out of the pocket. When you’ve got guys in zone coverage looking back at the quarterback and the timing of the play is off, I think everyone was covered in the rhythm of play, but Cam extended it with his feet. Broke out of the pocket and when that happens, zone coverages breakdown. We’ve got to get to him there and not allow him to hold on to the ball so long."

On The Poor Attendance:
"I didn’t notice attendance or anything, but I thought the fans were great. They came out early in the game. I thought they were loud. I heard all of them early. I don’t think we gave them much to cheer for in the second half, so definitely can’t blame them for that. Definitely want them to stick with us. This has been a great fan base for a long time. I think it still is. They haven’t had a lot to cheer about recently, but I can promise them that we’re doing everything we can and working as hard as we can to change that. We’re going to do it as soon as we possibly can."