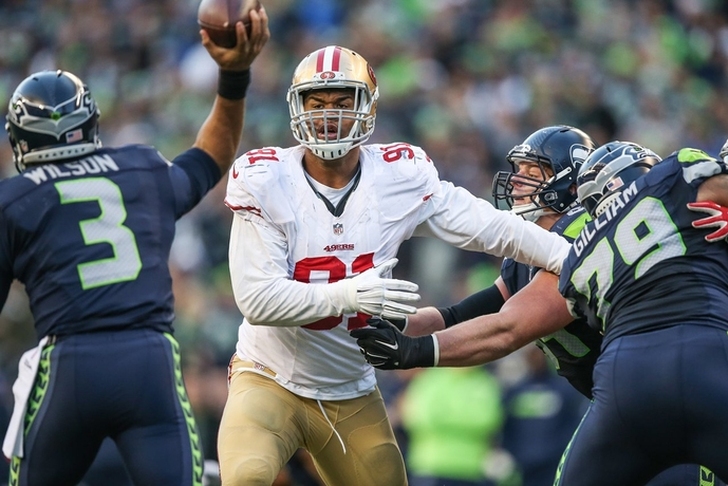 With the NFL season officially in the books, but now is a wonderful time to reflect on the 2015 NFL Draft. While the true career arcs of these players won't be known for years to come, we do have an idea of which way the teams' draft classes are trending.

The San Francisco 49ers lost a ton of talent before the 2015 season and would have loved to some impact from the draft class. Outside of a few players, that wasn't the case. With that in mind, let's review and breakdown the 49ers' 2015 draft class.

Armstead showed promise in his rookie year. He's a great fit in the team's 3-4 scheme and should be a full-time starter next year. He has a very bright future and this was rock solid pick.

While Tartt could still develop into a starter, he struggled last season. He was much better against the run than the pass, so hopefully he continues to develop. There were flashes, but Tartt needs to make strides next season. Harold outplayed Ahmad Brooks, but that's not saying too much. The team would love for Harold to take over the starting spot opposite Aaron Lynch, but he might be better off as a backup-type LB.

Bell was the team's third TE this season and is still very raw as a player. There is some potential there, but it might take a bit. Injuries cut into his chance at playing time, and he could still develop into a role player. Smelter started the year hurt and never played, so the jury is out on him. Pinion started, but that was to be expected from a punter. Silberman and Anderson made the roster, but didn't play. Brown saw the field as a tackle, but he struggled. Of course, that's to be expected when a 7th rounder play in his first year.

Grade: C+
The 49ers have on sure-fire starter in Armstead (and Pinion, but that's a punter). But everything else is up in the air. Tartt and Harold could play roles in the future, but just how big is unclear. This might end up being a class known for getting solid depth rather than impact players. That's not terrible, but the 49ers needed more of an impact after losing so much talent.