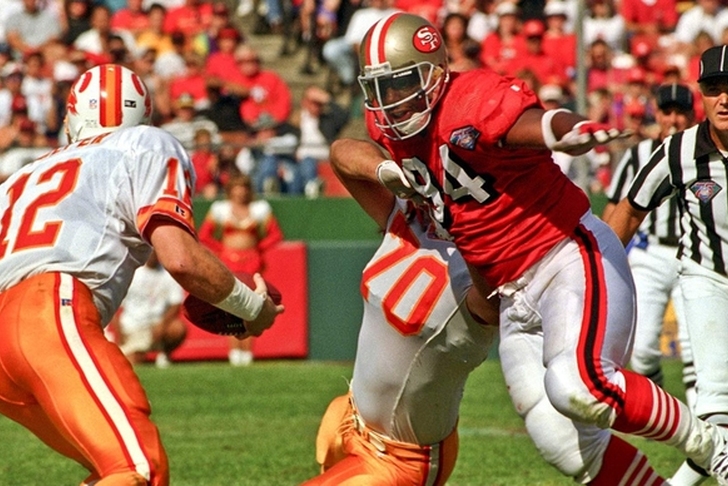 Former NFL Defensive Player of the Year Dana Stubblefield was charged with raping a "developmentally disabled" woman Monday. The charges were announced by the Santa Clara County District Attorney's Office Monday and were first reported by The Mercury News.

"This was a crime of violence against a vulnerable victim," Deputy District Attorney Tim McInerny said in a statement. "She was looking for a job and she was unconscionably assaulted."

Stubblefield was the 1997 Defensive Player of the Year while playing defensive tackle for the San Francisco 49ers. Stubblefield is facing five felony charges and a long prison sentence if he's convicted.

According to a police report, Stubblefield contacted the woman, who suffers from a "severe speech impediment" via an online babysitting service and claimed he was looking for a nanny. She went to Stubblefield's house for an interview on April 9th. After leaving, the woman received a text message from Stubblefield indicating he wanted to pay her for her time. Upon returning, Stubblefield allegedly picked her up, carried her to a room and then raped her. Stubblefield then gave her $80 and let her leave.

After the attack, the woman went directly to a police station and said she’d been raped by a man named Dana. Stubblefield’s DNA matches the DNA obtained from the victim, according to prosecutors.

Stubblefield's attorney, Ken Rosenfeld, said that the woman and Stubblefield had consensual sex and she later asked for money and a job. He called the rape accusations "false" and "fraudulent."

"Dana Stubblefield is being unfairly targeted due to his celebrity and wealth by someone with full motivation to lie." Rosenfeld said. "Mr. Stubblefield passed a lie detector test with flying colors and will present a full, vigorous defense against these allegations."

Stubblefield played in the NFL from 1993 to 2003. He was a first round pick by the 49ers and was the NFL defensive rookie of the year in 1993. He won one Super Bowl and was a three-time Pro Bowler.

"We feel that these are important cases for us to get it right," McInerny said. "We understand the ramifications both to the victim and to the suspect. This is a case that it took what it took for us to file charges this week. We take all these cases very seriously, especially sexual assault."

This is not Stubblefield's first legal issue. He was involved in the Balco steroids scandal and was sentenced to 90 days for stealing an ex-girlfriend's mail. He was also accused of harassment by his ex-fiance in 2009, although no charges were filed. Stubblefield's bail is set at $200,000 and his arraignment is set for Wednesday.