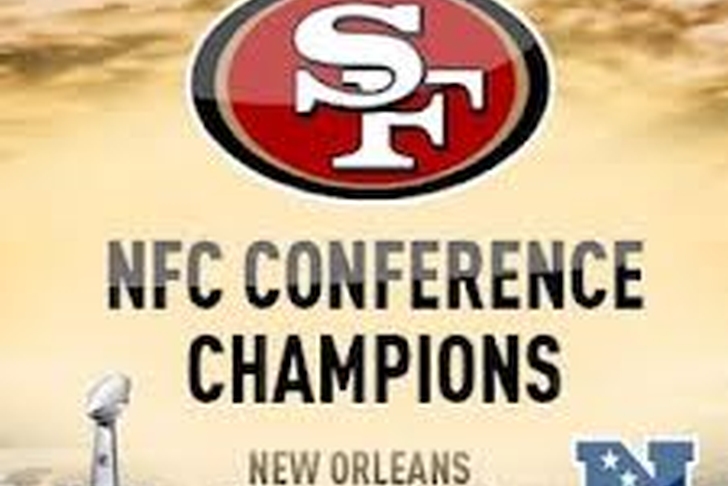 The glass is half full.  You can do anything you set your mind too.  Lindsay Lohan can beat this! David Akers can totally hit a 38 yard field goal.  Optimism - it's a crazy thing and it was tested on Sunday in the Cartelli household, especially when the one thing that brings you happiness is down 17.  On the road.  In the NFC Championship game.

Coming off a week where your team just dominated last years MVP and your newly crowned QB in his first playoff start breaks records, you have to feel a little bit of confidence going into the NFC Championship game.  It also didn't help that ESPN and NFL Network were all picking your team to win and it shouldn't be close.  They were even favored by four on the road according to Vegas.  The Georgia Dome was going to be rocking, the Falcons were going to feel disrespected, and they were going to come out swinging.  And that is exactly what happened.

Before I could blink Quintorris Lopez Jones, better known as Julio Jones was dominating.  He was a man amongst boys towering over everyone that even tried to cover him.  It was like if I was in a room with Danny DeVito.  After the first drive the 49ers were down seven.  Not to worry, we have Colin Freakin' Kaepernick.

My optimism is still at a very high point.

Well, Colin Freakin' Kaepernick and the 49ers have a three-and-out.  Not good.  Can the defense get a stop?  No, No they can't.  A field goal - they are now down 10.  That's okay, we're gonna get points right here right? Wrong.  Three-and-out. This feels like the 49ers vs. Seahawks all over again.

The Falcons smell the blood in the water, are the 49ers the innocent surfers deep in the ocean about to get chomped on?  Cue the Jaws Music as Julio Jones makes a ridiculous catch over Tarell Brown and the Falcons are up 17-0.  We're gonna need a bigger boat.

Oh, by the way.  This was all in the first quarter.  Optimism fleeting.

At this point in the Cartelli household, my face is in my palm, my Dad is walking around yelling and not being able to watch and my Mom is playing Spider Solitaire upstairs.  I did not watch 19 weeks of 49er football to be disappointed once again in the NFC Championship game.  Time to will my team to victory.

Optimism at an all-time low -  the 49ers respond with a long touchdown drive capped off my rookie LaMichael James touchdown.  17-7.  Screaming and yelling commence.  I remember saying louder and more confidently, "We're still in this".  A stop.  Another touchdown drive lead by Kaepernick and Frank Gore.  17-14.

After being punched in the gut and knocked down, we bounce back, By "we", I mean my Dad and I.  We're back in this.  Every play matters, we're screaming, high-fiving, wondering why Troy Aikman sounds like a lesbian, but I digress.  Did the 49ers leave too much time on the clock for Matt Ryan?  They sure did.  After having all the momentum, the 49ers allow a touchdown to put the Falcons up 24-14.  I hate you, Matt Ryan.

It's halftime.  Usually  my chance to shower, relieve myself in the restroom, eat, cry (when losing), and yell at the television some more.  Not Sunday, I had no appetite, bodily functions weren't working, I didn't move, paralyzed by an awful half.  Will this be the last half in the 2012-13 season for the 49ers?

The 49ers start with the ball and for the third straight drive they score a touchdown.  Down 24-21, both teams look unstoppable like underrated Denzel Washington & Chris Pine movie of the same name.  Shootouts are fun unless your team is apart of it then you just want to rip your hair out.

The 49ers needed a stop, a turnover, a something! I was being modest when I asked the #1 defense in the league for a stop and then the greatest thing you can do on Twitter happened.

Yes, I retweeted myself.  Don't overuse such a power, it comes with great responsibility.

The 49ers are in great position to tie or take the lead from the Falcons after the interception by Chris Culliver they get into field goal range and it's up to David Akers.  Akers in 2011 set the record for most field goals made in a season and started off the season with a record-tying 63 yard field goal in Green Bay.  Now, that I've said all the good about David.

Hate is a strong word.  It was said in a time of great passion, but Akers may be on my short list of actual things I hate**. Notice I said things - I know he's a good person, he did great things last year and has had a great career.  But he is awful, just the worst.  The Super Bowl is going to come down to a field goal and knowing that Akers is on the sideline scares the bejesus out of me.

**Other Things on Short Hate List: Girls that wear bright red lipstick, Adults with baby teeth and huge gums, Facebook (Especially people that like stupid pictures that say "Like this or you want your elderly Grandmother to die a painful death"), Bandwagon fans, and the Kardashians.

After the miss, this game entered into the pantheon of games that will shorter my lifespan by 5-10 years.  Can Matt Ryan score again and put this game on ice?  Not just yet.  He takes his eye off the ball, fumbles, and Aldon Smith recovers it.  New life!  Optimism still alive.  Screaming, yelling, and more high-fives.  This euphoria does not last.  Crabtree runs a slant route, catches it, gets to the half yard line and fumbles.

It's like I just watched Click again.  I can feel the tears building up.  The 49ers cannot lose because another fumble in the NFC Championship game.  For the love of Kyle Williams it cannot happen!

The 49ers get a stop thanks to a timely tackle by Carlos Rogers and they are back in business.  This time no messin around - Gore runs it in for a Touchdown and the 49ers have their first lead of the game, 28-24.

I'm on the edge of my seat now and have really poor posture, but all the back pain will be worth it if the 49ers can hold on.  There's plenty of time for Matty Ice to comeback and win this game, it's what he does.

It comes down to a 4th down and 4.  All-Pro LB Navorro Bowman on Roddy White - a mismatch.  There's some jostling for position, but Bowman knocks it away!

The 49ers win!  I'm jumping up and down, screaming, yelling, fist-pumping like I'm Tiger Woods and I just won the Masters.  My dad doing the same thing.  Mother dearest, dancing away.  Then a sigh of relief, the biggest comeback in NFC Championship history and a trip to New Orleans for the Super Bowl.  It's been 18 years.

18 years.  18 years since I was watching the 49ers demolish the San Diego Chargers in the Super Bowl.  18 years since Steve Young to Jerry Rice in that 49-26 victory.  If the 49ers Super Bowl drought was a kid, he could buy cigarettes, fight in a war, and get blacked out drunk in the dorms of his college because you know he would be in a University not a Community College!