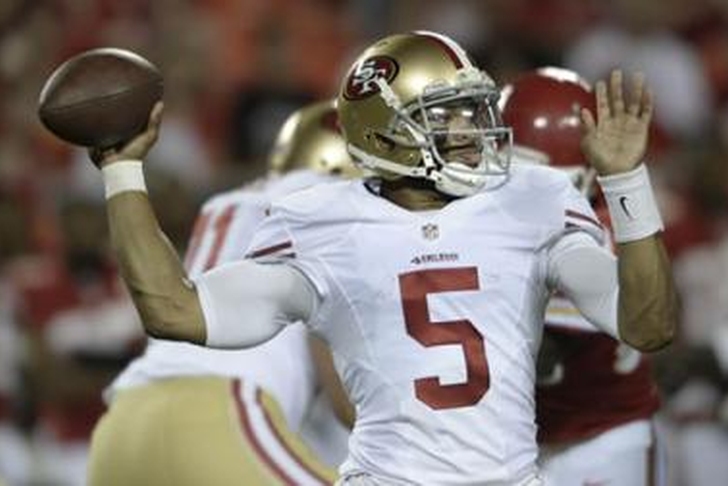 If we learned anything about the 2012 San Francisco 49ers, it was the importance of having a reliable backup quarterback. In week 10, it was Colin Kaepernick who came to the rescue and led the 49ers to a Super Bowl appearance, all but ending former starter Alex Smith’s tenure in red and gold.

The No. 2 signal-caller might be the most undervalued position in all of football. The one-trick pony sit-in-the pocket quarterback is becoming outdated thanks to the success of quarterbacks like Kaepernick, whose style of play has taken over the game. In a league where every quarterback is one hit away from the sidelines, having a backup plan can be essential to success.

Last season saw the electric Robert Griffin III go down with a sprained right knee injury, yet the Washington Redskins continued their playoff push with the help of backup quarterback Kirk Cousins, who threw for over 300 yards and two touchdowns in the team’s win over the Cleveland Browns.

Option four? The seventh-round pick in the 2013 NFL Draft out of South Florida, rookie quarterback B.J. Daniels. Daniels, who saw his first action of the preseason this past week in Kansas City, has also spent time in training camp at running back, wide receiver and on special teams.

Daniels entered the game against Kansas City in the third quarter and quickly added a spark to the team, leading the offense on a 13-play drive that ended with a perfectly thrown fade route for a touchdown – San Francisco’s only scoring drive in two exhibition games. Daniels finished the night having completed six of nine passes for 72 yards, and his touchdown helped seal the win over the Kansas City Chiefs.

When asked if he sees himself competing for the backup job, Daniels answered, “I don’t know. I was fortunate to hit the guys that were wide open and make the most of my opportunities. Right now, that is what I am going to continue to do. Any way I can help this team is what I am going to try and do.”

The competition to back up Kaepernick became even more challenging for Daniels on Thursday, as the 49ers signed nine-year veteran Seneca Wallace to a one-year deal following his release from the New Orleans Saints. Offensive coordinator Greg Roman said this week that Sunday’s game against the visiting Minnesota Vikings would be very important for all of the quarterbacks.

“I think it’s going to be a big game for them, big game for all of us,” Roman said. “But, I think they just need to improve really down-in, down-out consistency. The right reads, obviously making the right throws. They’ve done some really good stuff up till now, stuff that’s under-the-radar type things. So, it’s a matter of coming out this week and having a really strong performance.”

Regardless, the 49ers are set at quarterback for the immediate and foreseeable future with Colin Kaepernick under center. However, having a strong security blanket at the backup position will help keep the bottom from dropping out in a worst-case scenario.

For Daniels, the future is still to be determined, but he’s earned himself a look. He just might be the insurance that the 49ers are looking for.