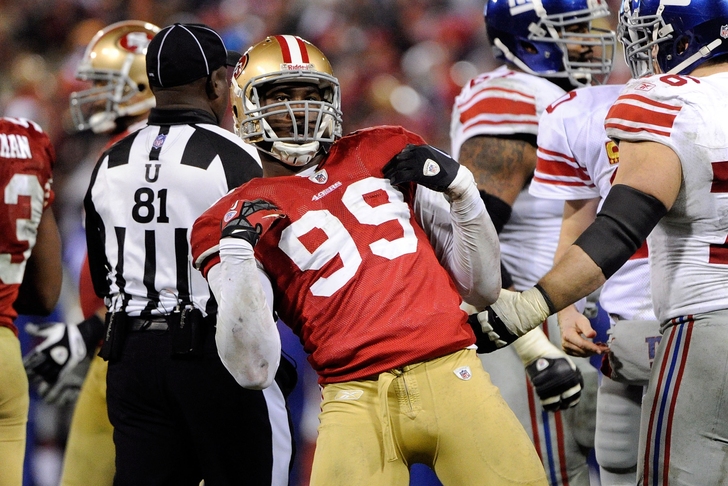 The San Francisco 49ers are coming off their bye week to take on the Carolina Panthers. The Panthers have been one of the hottest teams over the past month, winning four games in a row. The Panthers, led by Cam Newton, have had very high expectations over the past two seasons. Those expectations have led to bitter disappointment for Panther fans considering how well Cam Newton performed in his record-setting rookie season. Cam set all kinds of rookie quarterback records, but those records never translated to wins. The 2013 season has been a different story for the Panthers.

The Panthers enter week ten just one game behind the New Orleans Saints in the NFC South division. Although the Panthers come into week ten at 5-3, they have only played one team that is currently over .500. To say that the Panthers are becoming an elite team would be a big overstatement. A victory over the 49ers on Sunday would open a lot of eyes around the league. Teams around the league would definitely be aware of the Panthers if they are able to beat the 49ers on Sunday. That won't be as easy as it sounds.

The 49ers' bye week came at just the right time, as they are expected to get wide receiver Mario Manningham and linebacker Aldon Smith back this weekend. Manningham is coming off a gruesome knee injury that has sidelined him since late in the 2012 season. Smith is coming back after taking a leave of absence from the team to take care of some issues with alcohol abuse. It sounds as though both could possibly be a big part of Sunday's game plan against the Panthers.

Aldon Smith could be making his return at just the right time for the 49ers. The 49ers have struggled to record sacks and put heavy pressure on quarterbacks ever since Smith has been out. Putting heavy pressure on Cam Newton will be extremely important, as well as containing Newton who is one of the most dangerous running threats in the NFL. Newton can break a big run any time and runs like a full back. He embraces contact and does not shy away from any hits. If the 49ers are unable to contain Newton, they could struggle to stop the Panthers offense.

Mario Manningham could find himself inserted directly into the starting lineup considering all the problems the 49ers have had at the wide receiver position this season. Manningham is a good route runner who has the ability to catch the deep ball, which has been missing from the 49ers offense all season. Look for offensive coordinater Greg Roman to get Manningham involved in the passing game early to establish his presence.

The Panthers have a bevy of talented running backs that they can throw at opposing defenses, especially with Jonathan Stewart returning last week from injury. They can bring speed and quickness with DeAngelo Williams and Kenjon Barner. They can bring power and toughness with Jonathan Stewart and Mike Tolbert. Tolbert has proven to be one of the best short yardage and goal line running backs in the league with 4 touchdowns on only 57 carries.

The 49ers should be fresh coming off their bye week, which means they will probably be giving the ball to Frank Gore at least 20 times. The 49ers offense revolves around Frank Gore and the running game. Running against the Panthers defense will not be an easy task. The Panthers rank second in the league against the run. However, the 49ers rank number one in rushing yards per game. This should turn out to be a very interesting matchup between two dominant offensive and defensive units. The 49ers should be able to do just enough in the running game to set up play action for Colin Kaepernick who can make big plays down the field to Anquan Boldin, Vernon Davis, and Mario Manningham.

It may not be a pretty game, but the 49ers should be able to beat the Panthers on their home field coming off a bye. This tough and rugged Panthers team may give the 49ers all they can handle, just as they did week one against the Seattle Seahawks. The Seahawks play a very similar style to the 49ers and the Panthers came very close to beating them so it could be a tougher game than many people think for the 49ers on Sunday.