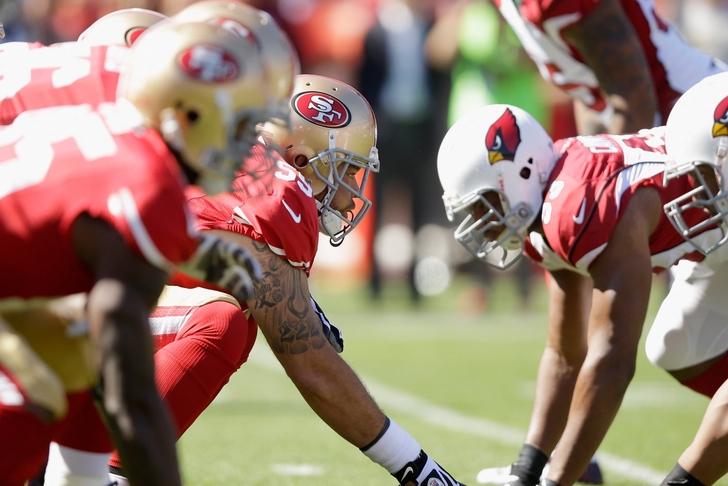 By now everyone should know the story of the San Francisco 49ers and Arizona Cardinals matchup. If you don't, it is this, the Niners have already clinched a playoff spot but with a win and a Seahawks loss they can clinch the NFC West and home field advantage in the post season. The Cardinals need to get a win and a Saints loss to ensure themselves of a playoff berth. The stakes are high for both teams as both will be desperately playing for a win. (The Cardinals could go 11-5 and still not make the playoffs, wow.)

For the Niners to come away with a much needed win this week they will need to play smart football and use these three things to help them:

1) Don't punt it to Patrick Peterson.

No. 21 on the Cardinals is an explosive athlete who has seen playing time on both sides of the ball this season. He is also one of the most prolific return men in the game today. So Niners special teamers, be smart punt the ball out of bounds and away from him, don't risk a quick six points on you.

2) Blitz the...you know what out of Carson Palmer.

Palmer is easily one of the most immobile quarterbacks in the league and is prone to throwing INTs when under pressure. Use Aldon Smith and the cornerbacks off the corner to make Palmer feel the heat all game long. I promise you, you will get at least two interceptions out of it, and who knows maybe they can be a pick-six like Navarro Bowman's amazing return Monday night. (WOW! What a play!) Did you really think I could write an article about the Niners and not mention that? Come on, who you kiddin'?

The Arizona Cardinals boast one of the premier rush defenses in the league, only allowing a league best 84.5 yards per game. They have only allowed one opposing running back to go over 100 yards against them. Who was that back? You guessed it. Frank Gore, who ran for 101 yards on 25 attempts in their last meeting.

If the Niners can do these three things and do them well it should lead to a win.

Side note: Vernon Davis went nuts against them last game with an 8/180/2 stat-line. Expect some more of the same from him this week as the outside receivers will be dealing with the talented secondary.