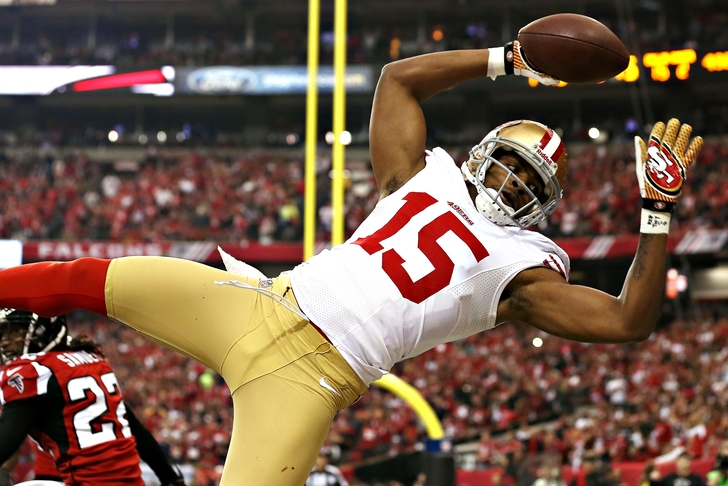 Michael Crabtree made his season debut during the San Francisco 49ers week 12 contest against the St. Louis Rams. Crabtree was returning from a torn Achilles tendon tear that he suffered

during OTAs in May. He started the game opposite of Anquan Boldin and played 42 of the 67 offensive snaps for San Francisco, good enough for 63 percent of the snaps. Crabtree was targeted four times by quarterback Colin Kaepernick and was able to bring in two of them for 68 yards.

While the numbers aren't eye-popping, a couple of things stood out. Anquan Boldin and Vernon Davis were able to work more against single coverage and find themselves open more often than not. Even with Crabtree making his season debut the Rams defense still made sure to pay attention to him, something to be expected from other defenses going forward. Another thing that was a good sight to see was when Crabtree beat the cornerback off the line up the sideline, brought in a catch-and-run that was good for 60-yards. He was caught from behind but that goes back to Crabtree getting back into football shape before he can outrun a cornerback like Trumaine Johnson, who slowed him down enough to get caught.

Many people thought that the return of Mario Manningham would spark the Niners passing game to come back to life. This was not the case and upon Crabtree's return, Manningham only played 16 snaps against the Rams. Crabtree is exactly what the Niners needed to get their aerial assault back on track. Going into week 14 and a match-up with the 11-1 Seahawks (who just man handled the Saints on Monday Night Football), Crabtree could play an even bigger role than he did in his debut. With only four weeks left in the season before the playoffs, Crabtree has the perfect amount of time to round back into shape and be peaking heading into the playoffs and beyond.

The addition of Crabtree going into the postseason will benefit the Niners immensely and could spell out trouble for the rest of the league.