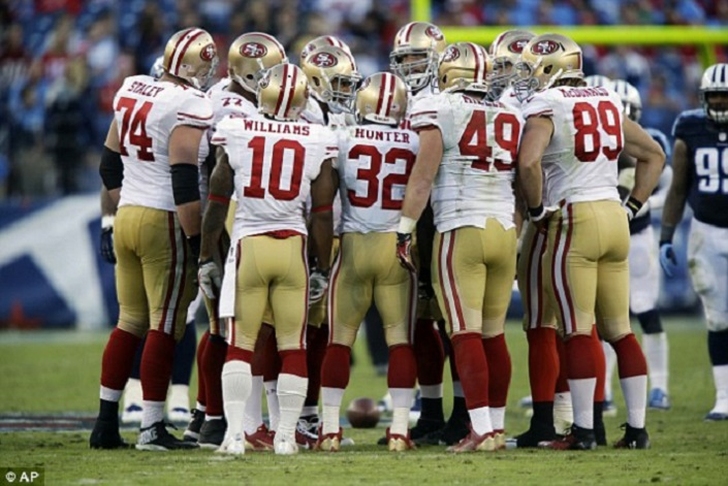 The San Francisco 49ers finished up the first half of the 2013 schedule with a 6-2 record, putting them in prime position for a run at a 3rd consecutive NFC West title.

Despite some crucial missing pieces on both sides of the ball, San Francisco is riding a 5 game winning streak into Sunday's game against Carolina, when they will kick off the second half of their season.

The 49ers expect to have a few reinforcements as soon as Sunday, with the full cast back within the next month.

Here are the 5 key players the 49ers will have back in uniform at some point in the near future, and how they can impact the team's playoff push and beyond:

5. Eric Wright (CB) - The 8th year corner was activated from the Non-Football Injury list this past week. Signed to a one-year contract during the preseason after a failed physical nullified a trade with Tampa Bay, Wright will step into a depth role in the secondary, replacing the recently waived Nnamdi Asomugha. While Wright won't be called  upon for significant playing time, barring some injuries, he is an upgrade over Asomugha and gives the Niners another solid corner behind Carlos Rogers, Tarell Brown, and Tramaine Brock. He is the type of under-the-radar acquisition that may come up with that one crucial play that makes him worth it. Don't be surprised if he does just that.

4. Tank Carradine (DE) - Selected 40th overall in April's draft, the former Florida State Seminole was activated from the Reserve/NFI list this past week. At a freakish 6'4, 273 pounds, Carradine is set to make his debut on the 53 man roster on Sunday after recovering from a torn ACL he suffered his senior year. Many scouts viewed him as a first-round talent without the knee injury, so if healthy he may work his way up the depth chart quickly. For now he adds depth at the ends as he mixes in with Demarcus Dobbs and Tony Jerod-Eddie behind Justin Smith and Ray McDonald.

3. Mario Manningham (WR) - Manningham returns from a torn ACL he suffered last December to a gaping hole at wideout. Behind Anquan Boldin and Vernon Davis, the 49ers have had almost nothing out of any other pass-catcher on the roster. While he may be eased back into playing time early on, Manningham's return may be the biggest addition when you factor in position necessity with expected contribution. Operating as a secondary receiver last year, Manningham's numbers weren't earth-shattering - 42 receptions for 449 yards and a touchdown - but he is no doubt an upgrade over Kyle Williams. His mere presence on the field should take some defensive pressure off Boldin and Davis and give the offense some more room to work with through the air. He appears less of a question mark health-wise than Crabtree, and just needs to get his game-legs under him before contributing the rest of the way.

2. Michael Crabtree (WR) - Here is the biggest wild-card of all the returning players. He suffered a torn Achilles in May and has been rehabbing his way back to health ever since. When healthy we saw what Crabtree could do last year, especially with Colin Kaepernick under center. He is no doubt the most talented receiving option on the team, and the fact that San Francisco has performed respectably offensively without him is encouraging. But how healthy is he? Crabtree was cleared to practice this past week, which is good news, but some reports suggested he was hesitant to really jump and land for passes. That leads to some skepticism on just how game-ready he can be by the team's projected return date of mid-to-late November. If he does play, how effective can he be at either less than 100% or subconsciously holding back to avoid re-injury. The team itself may even be cautious with him in an attempt to save him for the playoffs and limit his snap count until then. There are so many ways this can go for Crabtree and the Niners that it's hard to predict his impact, but if he is healthy and effective, the offense becomes Super Bowl caliber.

1. Aldon Smith (OLB) - Smith has been activated from the NFI list after spending the last 8 weeks in rehab for drug-related miss-conduct. All signs point to him being active and available on Sunday. While Defensive Coordinator Vic Fangio said Smith would have to earn his starting job back, he will be in there for crucial snaps off the bench. As the team's most talented pass rusher, his return to the starting lineup should be swift, and will probably come in Week 11. Dan Skuta and Cory Lemonier performed admirably in his absence, but there is no substitute for having the "Smith brothers" on the field together. With pivotal playoff-seeding games against New Orleans and Seattle still on tap, Smith's return will definitely be a factor in those games. San Francisco caught a break when they faced a string of subpar offenses with Smith out, so his absence may not have truly been felt. But his return should balance the defense out when they go up against the offensive-heavy squads down the stretch and into the playoffs.

Of all the teams getting injured players back in the coming weeks, San Francisco will benefit the most from them and have a solid opportunity to catch and overtake Seattle for the top spot in the division as the season winds down.