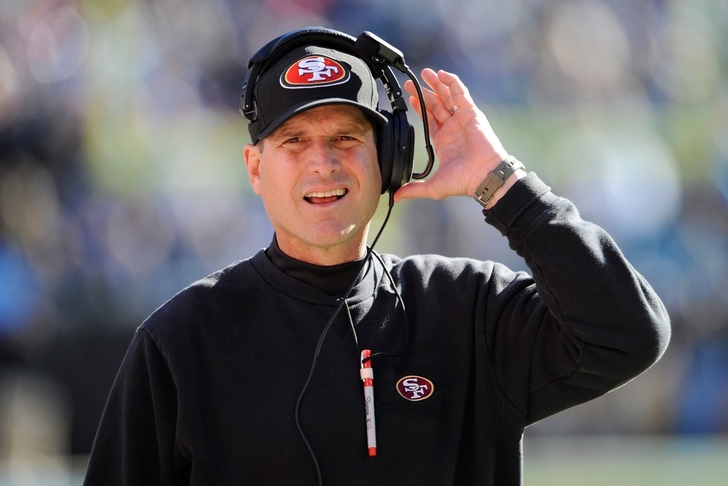 Whether or not you believe the San Francisco 49ers should get rid of head coach Jim Harbaugh after the season or not, it seems inevitable that change is coming. Fox Sports' Jay Glazers' report that Harbaugh won't be returning after the season wasn't the start of the fire - there have been reports dating back to last season that the coach was starting to wear thin on the Niners front office.

Harbaugh is one of the best coaches in the league, taking San Francisco to the NFC Championship Game in each of his first three seasons with the team. He's going to be hard to replace, so who are the candidates that would be able to keep the 49ers playing at a high level?

Gruden hasn't coached since 2008, but his position as Monday Night Football analyst (along with his Gruden QB Camp) at ESPN has kept him in-tune with the game. He has the in-your-face attitude that has worked so well for Harbaugh in San Francisco, but he's softer and much more personable. Essentially, he has the best parts of Harbaugh without the drawbacks and a personality that the 49er players would love.

McDermott is a rising star in the coaching ranks, who already has 16 years of NFL coaching experience - including six as a defensive coordinator - at the age of 40. He's the architect that has built and maintained Carolina's top defense while being there since 2011, and received interest from multiple teams last year about their head coaching vacancies. McDermott would keep San Francisco as a defense-first team, and would be a nice consolation prize if the big names listed above pass on the job. Per a report by CBS Sports' Jason La Canfora released on Sunday, Tomsula is one of three candidates the San Francisco 49ers that is currently "at the top of their list of candidates to replace" Harbaugh (the other two are listed below). Owner Jed York is a big fan of Tomsula, who was named interim head coach when Mike Singletary was let go in-season. Tomsula had a strong interview with the Vikings this past offseason, and the charismatic defensive line coach seems primed and ready to make the jump to full-time head coach.

Fangio has kept the San Francisco 49ers' defense together despite a litany of costly injuries, helping keep the 49ers in the playoff hunt with solid adjustment after solid adjustment. Fangio is likely to be on other teams' lips when it comes to their own head coaching searches, so the 49ers could very well look to promote Fangio to keep him in house. If the 49ers want to maintain continuity, the decision could very well come down to Tomsula and Fangio.

Jason La Canfora of CBS Sports believes it's a virtual lock that Gase will be an NFL head coach in 2015, and for good reason - Gase is the architect of one of the most dynamic (and productive) offenses in the modern era of NFL football. Gase turned down opportunities at advancement in both Minnesota and Cleveland last offseason, but a chance to take over one of the most storied franchises in all of sports could be enough to bring him to the West Coast. For the 49ers, Gase's intellect and ability to get the most out of his personnel would present an attractive package to replace Harbaugh.

Who do you think the 49ers should look at if Harbaugh is let go after the season? Tweet your thoughts to @brauf33 and leave a response in the comments!