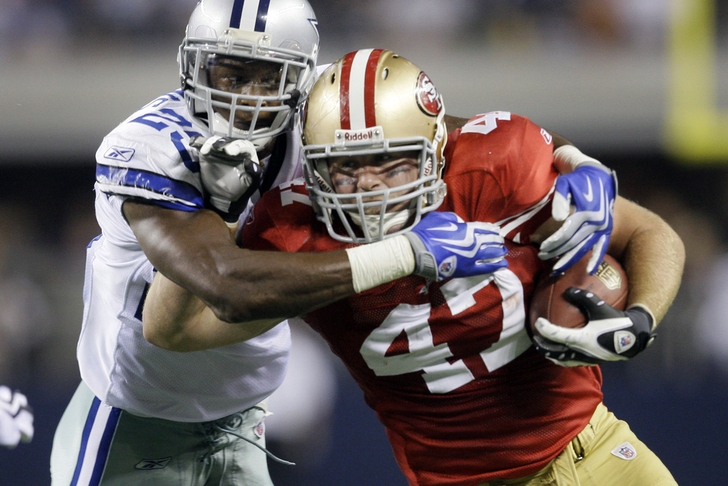 The Dallas Cowboys left their home turf to a chorus of boos after thirty minutes, after three Tony Romo interceptions and a slew of missed defensive assignments contributed to a disappointing start to the 2014 NFL season.

On the 49ers' side of the ball, just under 12 minutes of possession yielded four touchdowns as San Francisco looked like world beaters up 28-3 heading into the locker room.

Colin Kaepernick and the 49ers offense took the field to start the second half, but a solid defensive series by the Dallas Cowboys forced a three-and-out to give the Cowboys a little bit of life early on.

A dose of RB DeMarco Murray opened up the Cowboys' first two plays of the second half, but an illegal procedure penalty on 3rd-and-4 brought the Dallas drive to a screeching halt.

With the Dallas crowd murmuring to themselves, SF running back Frank Gore reached a career milestone on the 49ers' next possession - surpassing 10,000 career rushing yards to cement what has been an absolutely stellar NFL career so far.

An interesting turn of events would ensue just a couple of plays later, as a deflected pass by Kaepernick was intercepted by Dallas OLB Justin Durant. However, in the process of falling to the ground, the ball popped out of Durant's hands and was recovered by San Francisco - seemingly giving them a fresh set of downs.

However, an official review indicated that Durant lost the ball while trying to finish the catch heading to the turf, thus making it just a simple (yet complex) incomplete pass and a 3rd-and-10.

Kaepernick would miss WR Brandon Lloyd wide to the left sideline on the next play, as the Cowboys would finish off their second straight defensive stand to force a punt.

"The Cowboy" Justin Smith's second sack of the game threatened to put an early end to the Cowboys' next drive, but a (questionable) illegal contact penalty on third-and-long gave Dallas a fresh set of downs.

The boos from the home crowd became more pronounced every time Tony Romo made an error, as a stop-and-start drive aided by another illegal contact penalty would be saved by an absolute prayer of a heave to WR Dwyane Harris would be hauled down in coverage for a 56-yard gain.

Four plays later, DeMarco Murray would bowl his way through the San Francisco front seven for a two-yard touchdown run. Credit to the Dallas offensive line which provided a two-level push to lead Murray into the end zone on 4th-and-1.

Despite having sliced the Niners' lead to 28-10, Dallas' TD drive took almost seven minutes off the clock, allowing San Francisco to play work-the-clock as the third quarter came to a close. Another controversial penalty (offensive pass interference on Brandon Lloyd) negated a big first down for the Niners, as the Cowboys would receive another Andy Lee punt with just under 11 minutes to go.

The Cowboys would be unable to capitalize once again, however, as the 49ers would receive the ball near midfield with a chance to ride Frank Gore and rookie RB Carlos Hyde toward a victory.

With little time to work with, Dallas would sustain another drive into 49ers territory as a desperate Tony Romo attempted frantically to fight the clock. The Cowboys would score on a simple crossing pattern to WR Terrance Williams, but the clock stood at just under 2 minutes after the Dallas extra point.

Leading 28-17, the 49ers' hands team would swallow up the Dan Bailey onside kick. The 49ers would run out the clock to finalize an impressive 28-17 victory.