Jim Harbaugh! Saved by the Bell! Screech! The 11 Reasons Why This is the Greatest Video of the 90s 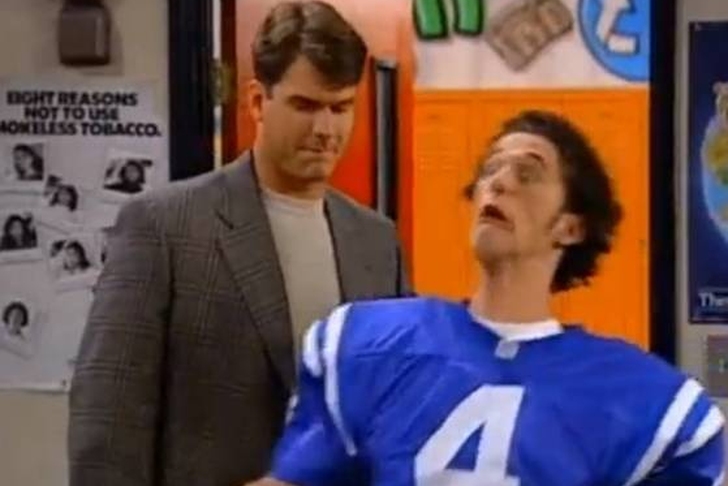 We live in the generation of the Internet.  YouTube videos, cat memes, hilarious GIFs, and people complaining about trivial things on Facebook and Twitter #firstworldproblems, while taking selfies of themselves on Instagram.  If you've been searching the internet for as long as I have you tend to think you've seen it all.  That nothing that ever comes up on Reddit will ever surprise you.  Well, think again, I give you the greatest video ever.  Jim Harbaugh on "Saved by the Bell"...No, not the original "Saved by the Bell" with our favorite characters Zach Morris, AC Slater, Lisa Turtle, Screech, Mr. Belding, and the girl from "Striptease", but the lesser known but still corny as all hell -- "Saved by the Bell: The New Class" that gives us mainstays Screech and Mr. Belding.

The video is embedded below.  Start at 14:59 (unless you want to watch the greatness that is this episode in full) and see the most amazing cameo of cheesy 90s television of ALL-TIME!

Jim Harbaugh on Saved by the Bell

I've learned so much from this timeless video and I hope you have to.  First off, Jim Harbaugh is a phenomenal actor that not only has comedic timing but really brings his message home.  He also is just an aggressive handshaker and back-patter and that if you ever come in contact with him (May God allow this to happen to every single one of you) just be prepared.  Finally, that no matter how long the Internet lasts -- probably until the "Matrix" or "Terminator" happens -- it just keeps on giving.