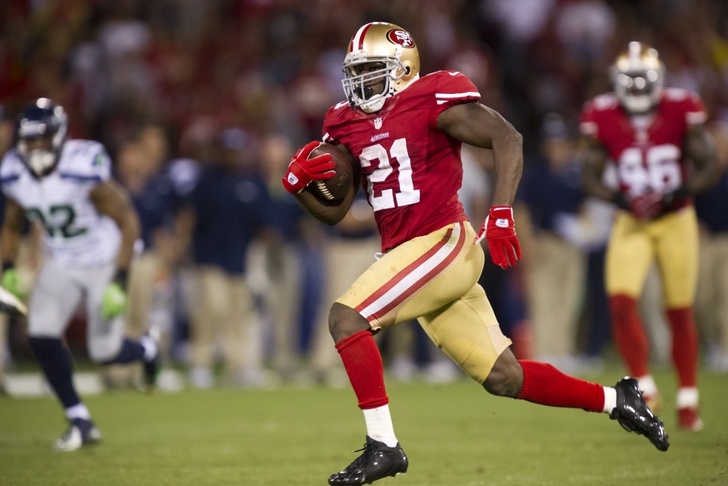 Defense and special teams were the name of the game for the Philadelphia Eagles in the first half, as Philly scored all 21 of their points without the help of the offense to take a 21-13 lead over the San Francisco 49ers into the break.

The San Francisco 49ers' defense started to pay dividends after the half, and the offense woke up to finish off a big 26-21 victory in Santa Clara.

Here's five things we learned from this day in the Bay:

The 49ers defense gave up zero points to the Eagles offense. Zero. Their pass rush was stellar, the run defense was off the charts (completely neutralizing McCoy and Sproles), and the secondary backed it up by blanketing all of Nick Foles' aerial weapons.

The bottom almost completely fell out late as Philly picked up just 5 first downs on their first nine drives. The Eagles picked up six on their final one against a suddenly porous 49ers D to scoot 90 yards down to the 49ers 2.

The 49ers would force an errant throw by Foles on a rollout on 4th-and-goal, stopping that possession cold. The Eagles got the ball back with just over 80 seconds left and no timeouts, but the Niners D clamped down hard (finished off by a Perrish Cox interception) to ensure an impressive victory keyed by a their defensive masterpiece.

4. The Eagles Offense Was Asleep For Most Of The Game

55 minutes into the game, the Eagles hadn't snapped the ball past their own 43-yard line. The offense had barely provided over 100 yards of total movement, looking listless at best against a very disciplined 49ers defensive unit. Foles would finally lead them into SF territory for the first time with under 4 minutes left with a little help from Jeremy Maclin (and a beautiful 22-yard one-handed catch), but that push (and their desperation drive at the end) were for naught.

3. The 49ers' Heart Showed In The Second Half

San Francisco's defense answered the bell all day long, and the offense followed suit as the second half went along. Down 21-13 at the break, San Francisco scored 13 unanswered second-half points (including a big 12-yard TD pass from Colin Kaepernick to WR Stevie Johnson that cut the deficit to one) to make Philadelphia pay for their offensive woes. A team that has been reportedly grumbling about the coaching style of head coach Jim Harbaugh played their hearts out for him on Sunday.

2. The Eagles Are Very Close To A Complete Package

Their offensive struggles on Sunday aside, Philadelphia is deep talent-wise in all three facets of the game: offense, defense, and special teams. The latter two stand as the only reason why Philadelphia was in this game to begin with, providing an INT return for a TD (Malcolm Jenkins), a punt return for a TD (Darren Sproles), and a blocked punt recovery for a TD. It was an impressive showcase for those two units, in spite of the offensive funk that cost them the game.

If they get the offense back rolling, the NFC could be theirs.

1. It Would Be A Blast To See This One More Time

Regardless of records, these two teams are just as explosive and stacked at the skill positions as any two clubs in the NFL. Philly's offense won't stay down for long. San Francisco's attack will likely start to hum even more as the season progresses. Throw in each team's impressive growth on defense and watching these two teams in January would prove for entertaining (if not heart-stopping) television.