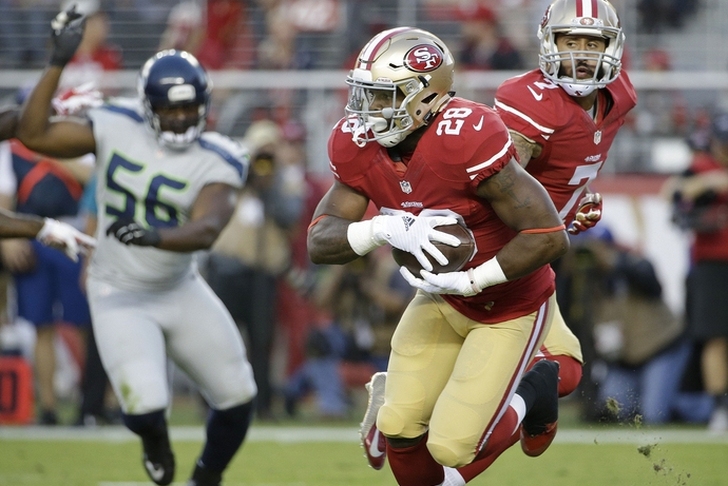 The start of the 2017 NFL Draft is just over two weeks away, and the San Francisco 49ers are the subject of numerous draft rumors. That's not unexpected given the 49ers hold the No. 2 overall pick and could take several different players or trade down. But the 49ers aren't just conducting draft business, they also received some good news on LB NaVorro Bowman. Here are all the latest 49ers rumors and news you need to know.

49ers Like Fournette, Ready To Give Up On Carlos Hyde?
The 49ers are a wild card at No. 2 this year, with a new front office in charge and the ability to go in several different directions in the first round. Running back wouldn't appear to be a major need with the presence of Carlos Hyde, but Tony Pauline of DraftAnalyst.com reports otherwise.

"Sources with knowledge of the situation tell me the San Francisco 49ers are very high on Fournette and are seriously considering using the second pick of the draft to acquire him," Pauline writes. "The new front office wants a bigger back to run the offense and they’re ready to give up on Carlos Hyde, who has had his struggles staying healthy since being drafted by the franchise in 2014."

It'd be an interesting move, since the current front office has yet to see Hyde play while both parties are with the 49ers. Fournette is a talented back and it'd be a huge upset if he gets out of the Top 10. Or perhaps the 49ers are leaking information during silly season to try and drum up trade interest.

NaVorro Bowman Update
Here's some much needed good news for 49ers fans: star LB NaVorro Bowman is expected to be cleared to return from his Achilles injury in the coming weeks.

Kyle Shanahan said he believes NaVorro Bowman will be cleared in two weeks when the on-field work begins in #49ers offseason program.

NaVorro Bowman said he did the running test today and he’s feeling good. He said he’s hopeful to be cleared for minicamp in a couple weeks.

That's huge news for Bowman, who has suffered two leg injuries in the past few years. Even with the addition of Malcolm Smith in free agency, the Niners want and need Bowman healthy. The hope is he can return to his previous All-Pro form.

Kirk Cousins Trade?
For those 49ers fans holding out hope for Kirk Cousins trade during or before the draft, it sounds like it's not going to happen. And this comes straight from the mouth of Cousins himself.

Washington QB Kirk Cousins on @NFLLive_esp today about the prospects of a trade before the draft: "I'm not expecting anything to happen."

Of course, the rumors won't die down until Cousins signs a long-term deal with the Redskins (or someone else). But a trade this offseason is unlikely. Perhaps the 49ers can poach Cousins in free agency, since the Redskins won't be able to hit him with the franchise tag again next offseason.

Follow our San Francisco 49ers team page for all the latest 49ers rumors or download the Chat Sports App!